Interior architect Joseph Dirand called on our savoir-faire for the layout of his new Parisian apartment. 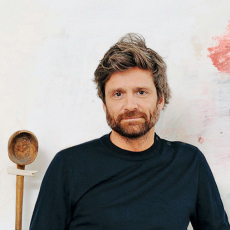 After living on the Left Bank for six years, Joseph Dirand, his wife Anne-Sophie and their two daughters moved to a more spacious apartment in the heart of the Right Bank. The interior architect, who comes from a creative family, then embarked on a personal project for which he wished to surround himself with work by his favourite artisans, capable of responding to his keen sense of detail. Our craftsmen, with whom the architect has been working for many years and with whom he notably collaborated with for the creation of the Shun & Le Jardinier restaurants in New York, took part in the adventure by carrying out several upholstery missions.

Sensitive to the way light plays on reliefs and flat surfaces, Joseph Dirand perceives design as "a well-studied space offering a certain quality of life". It is therefore natural that his new home, presented in the April 2020 issue of AD magazine, reflects his architectural approach, which he himself describes as "ornamental minimalism".

The entrance hall features a Gianni Moscatelli armchair with a metal structure and entirely covered by our upholsterers in an Ultrasuede fabric from Knoll Textiles. Three vertiginous limestone arches overlook this modern and elegant hall and give access to the living room and dining room.

Twelve armchairs designed by Pierre Jeanneret are placed around the small table signed by Joseph Dirand and in several corners of the living room, which have also been upholstered by our artisans in taupe-coloured IDO leather. Decorated with pieces of art, the living room brings to life several paintings by Angel Alonso, Harold Ancart and Lawrence Carroll.

In the kitchen, the cushion of the stool was designed by our upholsterers of the Lyon house, as was the kitchen bench made from a refined Holland & Sherry fabric. Next to this bench, an island in Breccia Stazzema marble dominates the kitchen. This material, with its very soft tones, is very present in this apartment and creates a real homogeneity between the different rooms of the Parisian residence.

Our seamstresses made three pairs of curtains with Flemish headings each lined with sateen, in fabrics edited by Romo and installed in the apartment on Gauthier & Compagnie rods. In one room, our artisans also manufactured roman shades in linen from the same textile publisher, renowned for its timeless elegance and its assortment of classic and contemporary designs.

Previous project New workroom
Back to our projects