Located in the sixth arrondissement of Paris, Lison de Caune's showcase is built around a straw marquetry panel inspired by the artist Frank Stella, a famous American painter considered to be one of the precursors of minimalism.
To echo this work and participate in the decor by Constant Clesse, the nine partners of Par Excellence have each imagined pieces of furniture reflecting their unique skills.

Atelier de Ricou combines two different skills on a daily basis: the creation of contemporary painted decors and the restoration of paintings and sculptures. In order to dress the window for Lison de Caunes, the artisans created a material which combines gypsum and paint and is worked with a spatula. The plaster plates were cascaded on a colored background, then arranged harmoniously to the desired visual effect. This rather free material forms a counterpoint to the graphic perfection of Lison de Caunes' inlays.

A new creation of the Manufacture, the carpet "Fragments" was produced with various textile techniques, offering a play of textures which are woven, looped and tufted by hand. Wool, Berber wool, silk, bamboo, lurex and linen are all mixed within this creation whose half-circles echo the straw marquetry panel.

Made of solid green marble, the coffee table for the showcase was made in France by Ateliers Saint-Jacques with a matte finish. Placed in the center of the scene, the rounded top of the creation contrasts with its geometric base.
To accompany this piece of furniture, the craftsman also made a bench in walnut and patinated bronze. The doors of this piece of furniture were designed in brass and wood marquetry to form a moucharabieh, a partition frequently used in the traditional architecture of Arab countries. 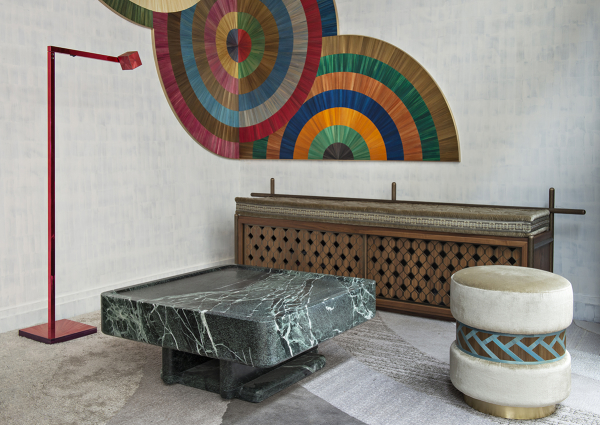 Our artisans from Lyon have contributed to the creation of this piece, making the seat cushion of the bench with a mattress effect cushion. This seat has been upholstered with velvet and is decorated with a braid from Declercq Passementiers.

Specialized in lighting design, Ozone has developed and produced a reading light on a stand in aluminum and brass, covered with red straw marquetry from Lison de Caunes. This piece was created a few years ago for a Par Excellence exhibition in New York, and is now displayed in the Parisian window of Lison de Caunes.

Meljac has become a worldwide reference in the luxury electrical hardware market: lighting controls, socket plates, lamps and other custom-made creations. Meljac's craftsmen have created a "Totem" power strip in brass covered with straw marquetry, presented here as a decorative object in its own right.
Damier switches in brass were also developed by Meljac with three engraved buttons.

Designed by Thierry Lebufnoir, director of the company Auberlet & Laurent, a set of intertwined discs in the ceiling was imagined to be tailored with the environment. At the same time harmonious and functional, he conceptualized the work by foreseeing a luminous channel for indirect led lighting.

To dress this window, our seamstresses have made a double-sided curtain. Lined with a cotton satinette, this curtain is decorated with a braid and is installed on Corler hardware. In addition to the bench seat cushion made by the Saint Jacques workshops, our upholsterers have made an ottoman which incorporates a straw marquetry ring and sits on a brass finishing base also designed by the Saint Jacques workshops. This ottoman has been carefully covered in a velvet by Declercq Passementiers. 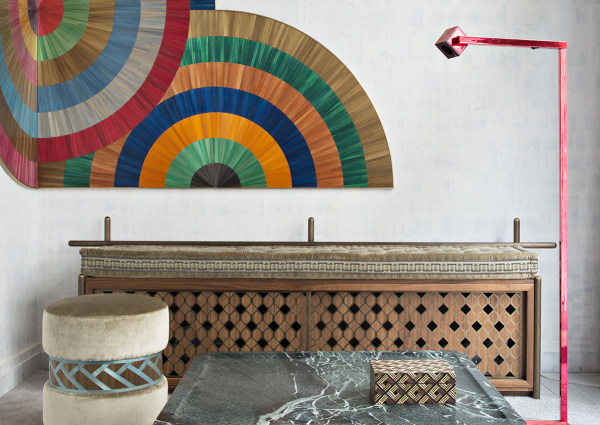 A family-run trimmings company founded in 1852 in Paris, Declercq Passementiers perpetuates a traditional savoir-faire. The curtain made by our craftsmen is composed of two beautiful fabrics from Declercq Passementiers, Tartaruga color Lapis and velvet Oxydation color Lichen, both designed by Jerome Declercq. This drape is adorned with a custom-made archival braid and two Utopia tiebacks, paying tribute to the architect Le Corbusier. 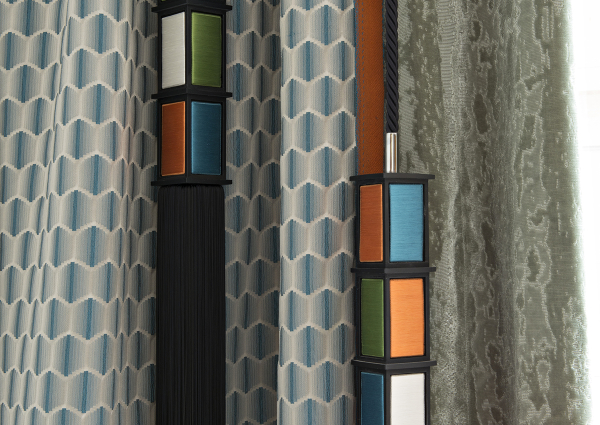 A big thanks to Lison de Caunes for this initiative, to the Par Excellence collective, and its faithful partners for this creative synergy which we are so fond of.

Previous news AD Matières d'Art 2021 exhibition
Back to the news

Next news Jouffre opens its own workroom in New York
+
This website uses cookies to ensure you get the best experience. More info
×