Jouffre opens its own workroom in New York

“Together, we realized one of our wildest dreams: to acquire our own workroom in the heart of New York City."
- Romain Jouffre, President.

It all began in the early 2000s. Charles Jouffre created the Lyon workshops thirteen years ago and then wanted to set a new challenge for himself: to bring this art form, that he had chosen as his vocation, across the Atlantic to the United States. In the collective imagination, New York is “El Dorado - City of Gold”, a city of opportunity. For the French craftsmen in this foreign locale, it is one of the craziest and most audacious projects!

The story has been written bit by bit, by way of travels and efforts, from small sites to immense projects. Our workshops succeeded in creating relationships with iconic designers who Charles Jouffre had admired for many years, including Robert Couturier, Juan Pablo Molyneux, Peter Marino, Tony Chi and Brian J. McCarthy to name just a few.

In 2013, Jamie Drake, founder of Drake/Anderson design studio, entrusted us with the upholstery work for renovating a lavish and historic residence, the Ballyshear estate located in the Hamptons. This project marked a significant turning point in the history of Jouffre. Both the size of the project and the context of the work led Charles to recruit local upholsterers and seamstresses. Veronica, Diana and Joseph, who are still part of the Jouffre adventure today, joined the team along with Philippe Le Du, Charles' faithful collaborator in the USA since the early 2000s.

Our company, which had until then been working from a showroom in the Chelsea neighborhood, moved to a small workshop in Long Island City, on the other side of the famous Queensboro Bridge that links Manhattan and Queens at 61st Street. Things accelerated with Romain Jouffre's arrival in New York, and 4 years later in 2017, the team crossed the street to move into a new workshop of more than 1000 square meters, completely renovated in our style by architect Elsa Arsenault. 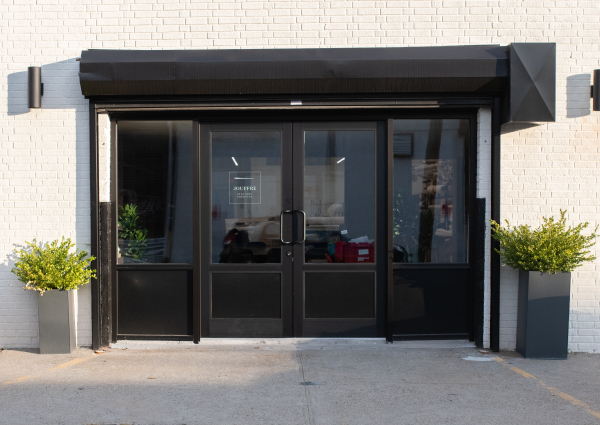 More craftsmen joined our team, and the company became more structured. We are now totally autonomous and work for the greatest New York and American decorators.

The story is beautiful and it continues. The workshops, only a few feet wide at the beginning, became too narrow for our craftsmen to work comfortably on the huge sofas we were tasked with. The company saw its sales increase from a mere $1M in 2014 to $5.6M in 2019 and we are now 30 employees! We had no choice, it was time to move again.

The idea this time is to think in the long term: we decided to acquire a workshop which was twice as large, still in Long Island City and only a hundred meters away. This way we could create the ideal workshop we dreamt of, both with and for our artisans.

Large, light and airy spaces promote the quality of life for our teams, and allow us to welcome our customers in the best conditions. They will be able to take advantage of our large photo studio to immortalize their creations, and can spend hours strolling through our brand new fabric and trimming showroom where they can perfect their projects and select the textiles that will dress the furniture in which we are entrusted. 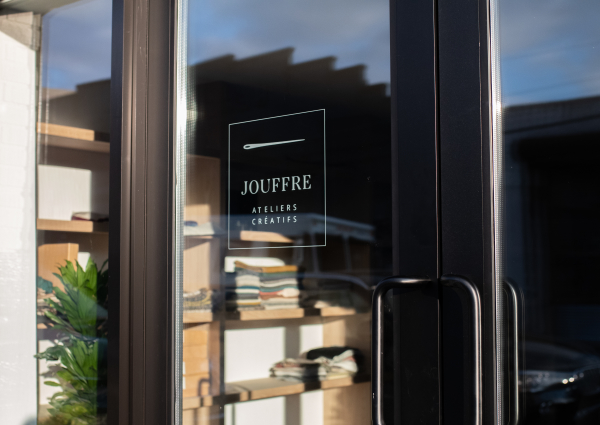 This new move marks a big step in Jouffre’s history. Our teams continue to grow and take on new, ever more ambitious projects, with the goal of establishing ourselves as the benchmark for high-end, custom upholstery work in the United States. We are also committed to training new artisans in the upholstery trade, to accompany them and to ensure the durability of this art form on the American continent.

Today, it is with great joy that we plan to open the doors of our workshops to celebrate the beginning of our new adventure with you. For this event, which our teams have been eagerly awaiting, we wanted to create an unforgettable moment where clients and partners can discover and enjoy Eclecticism, a scenography inaugurating our workshops.

Imagined by Garcé & Dimofski and inspired by Pierre Le-Tan's lithographs, Eclecticism highlights our exceptional French savoir-faire through creations conceived and developed by several contemporary designers including Ian Felton, Minjae Kim, Garance Vallée, as well as our own Design Studio and which will be surrounded by surrealist objects from R & Company.. This scenography poetically approaches the idea of a figurative universe inspired by Pierre Le-Tan's lithographs, featured on the covers of several magazines. This aesthetic game reflecting different styles and eras is the result of exceptional French savoir-faire.

This aesthetic universe honors all of our French craftsmanship that we are proud to perpetuate on American territory. For this project, we were once again lucky enough to highlight the skills of our partners from Par Excellence, with a superb rug imagined as a watercolor and woven by the Manufacture des Tapis de Bourgogne, a sublime shelf developed by the Ateliers Saint Jacques and Lison de Caunes, high-end light switches from Meljac as well as sublime fabrics and tiebacks created by Declercq Passementiers.

I want to RSVP to the event!

Previous news Lison de Caunes Showroom
Back to the news

Next news Eric Nakassa, Furniture Designer for Jouffre USA
+
This website uses cookies to ensure you get the best experience. More info
×