Renovation of the Pompadour suite, one of the most famous room of the French palace located rue de Rivoli, in front of the Jardin des Tuileries. 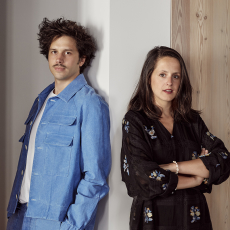 "Charles was the first person to believe in our ideas and to show his trust by working with us on various projects, while also making his experience and know-how available to us. Jouffre's unique mastery has enabled us to grow and make our mark, so that we can now roll back our creative boundaries even further."

Le Meurice has been synonymous with French elegance since 1835, with its sumptuous decor dating from the 17th century. Its gourmet restaurant Le Meurice Alain Ducasse, inspired by the Peace Room at the Palace of Versailles, and ceremonial Salon Pompadour are wonders of classical architecture.

200 years on, Le Meurice is continuing this tribute with the refinement of the 18th century and a completely new suite named after the Marquise de Pompadour. Having enlisted Philippe Starck to renovate the hotel’s restaurants in May last year, Charles Jouffre was the one given the challenge of creating the Pompadour Suite in the style of a royal residence.

Jouffre set the tone for this project, which involved a number of highly regarded artisans, with expertise as distinguished as silk by Prelle, trimmings by Declercq and chandeliers by Lucien Gau. The perfect blend of classic and modern, the Madame de Pompadour apartments incorporate intuitive automation and state-of-the-art technology to provide guests with maximum comfort.

“We decided to refresh the decoration and style of the rooms at the hotel Le Meurice. My intent was to give them a more contemporary character, while retaining the hotel's specific Louis XVI style. I handed the assignment to Charles Jouffre, who had designed the sumptuous decor of the Main Foyer at the Opéra Garnier. He revisited the rooms and gave them a warmer character, with a touch of humour and glamour, marrying past and present. This collaboration was a real success, and his work is truly in harmony with the hotel's history. He endeavored to reinterpret the very spirit of Le Meurice in order to rediscover the spirit of a French "home sweet home" - a form of decoration envied the world over."

Previous project Hotel Royal Evian
Back to our projects