In October 2018, David Mallett opened his first hair salon on the American continent, right in the heart of New York City. 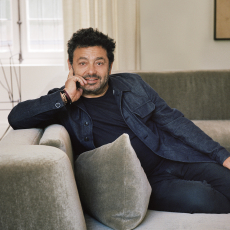 "Our collaborations with Jouffre have always given our projects a touch, a spirit or even a vision that is both authentic and of very high quality. Charles Jouffre always provides seriously relevant expertise. His productions are all it takes to decorate a room – they are invitations to rest and privacy, exuding comfort, harmony and a great sense of humanity."

“I am always mesmerized by the positive effects and beauty you pick up traveling the world. My new American adventure won’t be a French or Australian project. It will be a global one. A place where people, races, and languages are mixed, creating a real journey in the heart of the brand”
— David Mallett

In October 2018, David Mallett opened his first hair salon on the American continent, right in the heart of New York City.

The Australian hair guru collaborates with famous designers, magazines and photographers and already has two salons in Paris.

The 1,614 sqft space designed by a Parisian architect came to life on the 5th floor of the luxury concept store The Webster, founded by the Laure Hériard Dubreuil. This masterful building bathed in light needed to dress its windows.

A pair of sheers and three blinds were manufactured by our artisans from Lyon and installed on site by our installers from the New York team. Our seamstresses created the delicate pieces with a fabric from Dedar Milano, and designed sheers and blinds that do not obstruct the light but instead soften and embrace it.

Jouffre is delighted to have collaborated with Charles Zana on decorating the first American hair salon of world famous Australian hairstylist and colorist David Mallett.

Our artisans have thus contributed to the creation of a new American beauty hot spot.

Previous project A Parisian apartment
Back to our projects