Steven Volpe and his team put their creativity to work renovating a 8,500 square foot family apartment, and surrounded themselves with our craftsmen to transform this living space 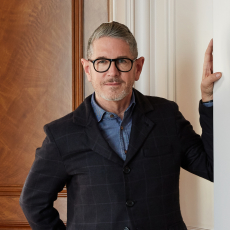 For over twenty years, Steven Volpe has been bringing his clients’ dreams and ideas to life, drawing on the past and present to build their future. Sumptuous houses, modern apartments or elegant villas, the interior designer and his teams know how to give new life to spaces. For the layout of a young family’s apartment overlooking Manhattan, the designer has once again called upon our workrooms to implement our savoir-faire.

The renovation of this apartment, located on the 85th floor of a skyscraper, was a major challenge for Mr. Volpe and his Design Director Ralph Dennis, who had to reduce the wind noise in the massive building. “When the wind would kick in, you’d hear wailing noises reverberating through the apartment”, confides the designer. “Our solution was to devise a new architectural shell, with walls and ceilings that are independent of the walls of the tower—and independent of one another. This was not a simple task.” The duo were inventive in developing innovative solutions to protect the spaces from the noisy wind. Our workrooms have accompanied Steven Volpe and his team to convert this living space with a breathtaking view of the “Big Apple”.

Our teams have demonstrated their savoir-faire in different pieces for the residence. In the living room, our upholsterers had the chance to restore two exceptional sofas by designer Joaquim Tenreiro, which they dressed with a Prelle fabric. This talented Brazilian-born designer was instrumental in developing the identity of Brazilian design on the international scene. The creation of pieces combining traditional values and modern aesthetics allowed him to become one of the greatest artists of the 20th century. To this day, many of his iconic designs created from native Brazilian wood species are highly sought after by collectors around the world. Our teams also had the opportunity to restore two Gio Ponti chairs, a Milanese designer and architect considered to be one of the masters of Italian architecture. His incredibly innovative and avant-garde creations have made him an admired artist since the 20th century. It is with great dexterity that our craftsmen have completely redone the upholstery of this set of rare pieces to ensure optimal comfort. In this room, our team also installed five pairs of beige curtains, perfectly matching the peaceful atmosphere of the room.

In the dining room, with an unobstructed view of the Empire State Building, our upholsterers used traditional techniques to restore a set of chairs created by famous French decorator Jean Royère; installed around a magnificent marble table. To achieve this, our craftsmen first made a quilted spring upholstery in horsehair. This method consists of a traditional lining, followed by a setting in horsehair, folding and stitching in several points to give the shape of the seat. Finally, the last step was applying the fabric and realizing the finishing touches. Our seamstresses have made three pairs of curtains in silk taffeta to dress the space.

For the kitchen of the residence, our team Design Studio and our craftsmen have worked on conceptualizing and fabricating a grey banquette. This one was installed in order to optimize the available space of the room and guarantee an ideal comfort.

Custom upholstery work was done by our workrooms in the master bedroom and the two children's bedrooms. The bench placed at the foot of the bed in the master suite was reupholstered by our craftsmen, who took care to recreate the entire seat of the piece of furniture. Behind the bed in one of the two children's rooms, our craftsmen worked on the blue wall upholstery, bringing depth to the room. Our teams also developed the fabric cladding the bunk bed in the second child's room in a powder pink fabric, perfectly harmonious with the rest of the furniture and the curtains carefully installed by our upholsterers.

In the library of the apartment is a pair of Jean Prouvé armchairs whose back and seat cushions were made in our workroom. This room also houses a Jean Royère coffee table placed in the center of the room, as well as paintings by Jean-Michel Basquiat and Andy Warhol. Curtains have been put up on the huge window to protect the room from the outside light.

Previous project Residence overlooking Manhattan
Back to our projects