Our workroom joined Rafael de Cárdenas to develop and carry out various upholstery works for the luxury exploration yacht. 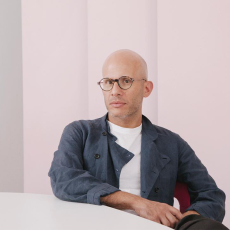 Jouffre's expertise in upholstery provides an unparalleled solution for every kind of material problem. They imbue each of our collaborations with a touch of timeless mastery. The works are all dynamic in their own right and give the apartment a cosmopolitan vibe, and ultimately the appeal of the Upper West Side is this idea of a New York, intellectual, well-read, well-traveled life.

After starting his career as a menswear designer for Calvin Klein, Rafael de Cárdenas chose to broaden the horizons of his design practice. Specializing in architecture, furniture design and art direction, the multidisciplinary studio Rafael Cárdenas, Ltd. was founded in 2006 in a cosmopolitan city that mirrors its founder: New York.

A few years ago, the designer and creative director — whose creations have been compared to contemporary art installations — designed this yacht, which can accommodate up to 23 people and navigate nearly any environment on the globe, from the polar regions to the Mediterranean.

Like a ship's captain, Rafael de Cárdenas led this project by forming his own team of skilled artisans. Our workshops, ready to embark on new upholstery projects, invite you to discover their achievements through a guided tour of the yacht.

In this space with large windows allowing a view between land and sea, our upholsterers were asked to create two pale celadon sofas with fluted backs. Resting on a wooden structure whose base was covered with leather, the lower part of the seat was made with straps. These two pieces of furniture were then upholstered in leather from the Italian firm Foglizzo, which has been committed to excellence for three generations. Four cushions, also made by our team in Foglizzo leather, are placed on the two seats of the sofas as well as several decorative ones covered with fabrics from the Milanese house Dedar.

Both seats are accompanied by two Pacha armchairs signed by Pierre Paulin that our craftsmen have covered with a Designtex fabric with carefully worked finishes.

A four meter long sofa was designed for the owners and their guests to enjoy this entertaining space. This sleek piece of furniture was upholstered in a Santa Rosa gray fabric made by Holland & Sherry and is accessorized with several decorative pillows also manufactured by our teams.

Just as in the living room, two Pierre Paulin armchairs have been installed in the cinema room after being restored in our Lyon workroom. They are covered with a Rogers & Goffigon fabric whose soft and thick loops guarantee a great comfort to these mythical and textured seats.

The dining room, a place for sharing:

Our teams worked on the restoration of thirteen chairs created by the iconic 20th century French designer Pierre Guariche. Our upholsterers completely recreated the seats of the chairs in the yacht's dining room and upholstered them in two different leathers bringing more originality and modernity to these pieces of furniture.

Previous project Tribeca
Back to our projects