Seaboard residence 60 miles from New York, in the charming town of Greenwich. 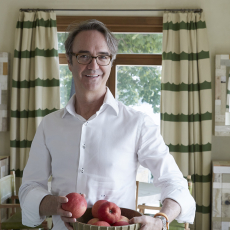 "I have enjoyed working with Charles Jouffre for 15 years and am always amazed at the solutions they come up with for window treatments and upholstery challenges. I look forward to many more collaborations together with their international team."

In 2014, de Biasi collaborated with Jouffre to decorate a sumptuous property located on the waterfront, close to Greenwich, Connecticut.

Frank de Biasi and his team renovated a boathouse on the property first, located on the edge of the ocean just a few steps away from the main house. Jouffre had the mission of fabricating and hanging the draperies, done in a white and green fabric by Pierre Frey. Green is a color which the New York interior designer particularly likes and which has become his signature over the years.

The French ateliers then had the opportunity to work over the course of several months in the main house, for which the seamstresses fabricated all of the draperies, sheers and roman shades. Jouffre's installers, after hanging and fitting the window treatments, worked for several weeks on the installation of stunning wall-upholstery in the most beautiful rooms of the property.

Previous project AD Intérieurs 2014
Back to our projects

Next project Chalet in Andermatt