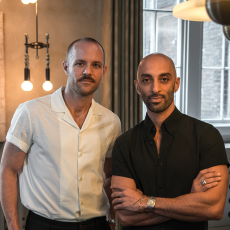 Apparatus is a New York based design studio that explores the relationship of lighting, furniture and objects in immersive environments, threading the historical and the cultural through a modern lens. Founded in 2012 by Gabriel Hendifar and Jeremy Anderson, APPARATUS maintains showrooms in New York, Los Angeles and Milan, and exhibits during Salone Del Mobile and has participated in Collective Design Fair in 2016 and 2017.

As a first-generation American born after the Islamic revolution, Hendifar’s moments of intersection with Iran and its culture were passed down as an idealized and melancholy memory. The collection and the environments created to support the work form a tangible connection to a place suspended in time, yet marked with the studio’s neo-futurist vision.

Gabriel Hendifar approaches the studio’s work as narrative, drawing on the vocabulary of desire and emotional response. Inspired by the modernist principle of a total work of art, the studio is an ever-evolving articulation of considered spaces and the things that live within them.

Sensual materials like marble, suede, horsehair, lacquer and porcelain are combined with patinated brass to create the studio’s distinctive catalog. Embracing a tradition of studio craftsmanship, each sculptural piece is hand-finished and assembled in an historic new york space that encompasses gallery, development and production.

The studio’s work has been featured in important design and lifestyle publications including Architectural Digest, T Magazine, World of Interiors, Vogue, Wallpaper, and several international editions of AD and ELLE Décor.

In 2018, we had the opportunity to collaborate with APPARATUS on ACT III by handcrafting all the drapes of the New York Showroom. Our seamstresses, from their Long Island City workroom, worked hard to sublimate the Pierre Frey fabrics selected specifically for the occasion.

Previous project Monaco Yacht Show 2018
Back to our projects

Next project The Belnord